My husband, sixteen year old son and I just got back from an incredible week in . A friend of ours had organized an event called Celt Fest and we went down to take part in workshops and sessions. I have a degree in French and Spanish, so I was looking forward to reviving my linguistic skills as well.

But why a Celtic festival in , you might ask? Many people from the Spanish provinces of and , which are both part of the group of Celtic nations, make up part of the population of . Many Spaniards came to in the 18th, 19th and early 20th century with close to a million arriving between 1900 and 1930. So what does that have to do with Celtic music? Many of their musicians play gaitas or bagpipes. 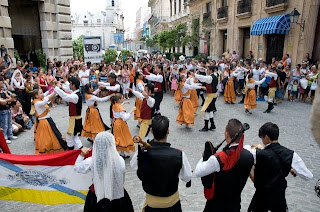 The Irish are also part of the makeup of this amazing country. “Historically, most of the Irish who came to for the construction of railways used to transport products to and from the sugar plantations in the latter part of the 19th century, and for the construction in 1902 of the 1,000-km trans-Cuba railroad. But others had been swept here in earlier currents. Some came up the Antilles from where they had been deported as slaves during Cromwellian times. Another Irish influx came with the royal armies of .”

There were professional musicians taking part in the festival from Cape Breton Island and in eastern , in western , , and a bunch of us from who were just there to take it all in and play whenever we got the chance. Check out the page for the festival to see the incredible Cuban talent the festival embraced.

Now to the travelogue portion of the blog. The 6:20 a.m. flight from was relatively quick and happily uneventful. We landed just before 10:00 a.m. to a glorious sunfilled day. A Sunwing representative guided us to our bus and we set off on our hour and a half journey to the hotel. Someone said the busses in look like caterpillars with antennae and they were right. 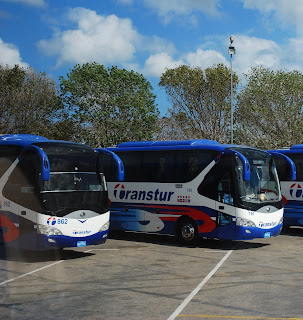 We arrived at the hotel, dumped our bags in the room, grabbed a quick bite and headed to La Habana Vieja (Old Havana) on the 2:30 hotel shuttle bus. A concert was scheduled for that evening so we had a few hours to walk around the old part of the city and take photos. Reconstruction has begun in to try to rebuild many of the elegant old buildings. The centre of La Plaza Vieja was totally rebuilt after being an underground parking lot. 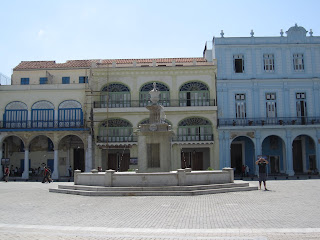 I love the tree growing right in the wall. This was a fairly common sight on some of the very old structures. 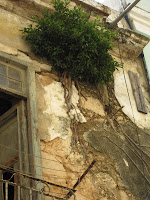 Our son tried his first espresso in La Plaza Vieja and loved it. I’m documenting the initial coffee experience for the group. That’s my husband, son and a friend who travelled to with us. 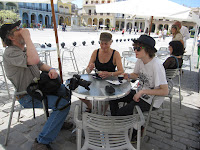 The opening concert was to be a mix of Cuban Celtic musicians and visiting musicians and was to take place at the Casa de Poesia near La Plaza Vieja. The entry to the venue was through a small room with photos displayed on the walls, but that room opened out onto an incredibly beautiful open-air courtyard. One of the bagpipe bands played on a balcony high above the crowd, while other musicians and dancers took turns on the small stone stage. People watched from elegant balconies behind the seated crowd. The birds chirped incessantly and the sun shone down on what seemed to be the harbinger of an incredible week of music and friendship. 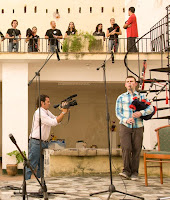 The last free shuttle bus to the hotel left at 6:00, so after the concert we started what was to become our evening ritual- getting a taxi back to the hotel. That is more complicated than it sounds as it involved me haggling with the driver, in Spanish, to get the best price we could for the half hour ride. We were delighted when I was able to get a better price than some in the group who had a Cuban doing the bartering. The nightly taxi ride was also a nightly adventure as many vehicles were not as road worthy as we would have liked. I always sat in the front and kept up a running conversation with the driver. My brain got very sore, very quickly, and I still find myself thinking in Spanish now that we’re home. 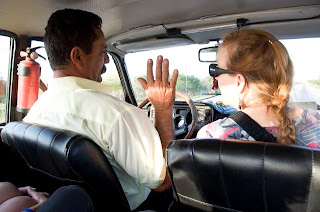 We piled out of the taxi and headed down to look at the beach prior to hurrying to the dining room to eat before they closed. My heart soared as we walked along the sand, the sun warm and golden on our faces. It was spectacular. 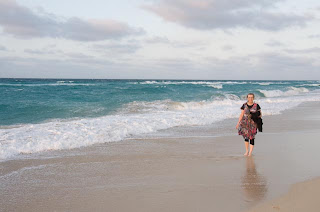 The hotel was built by the Russians and, despite the square almost military design, was spacious and open to the air in many areas. The rooms were very clean and the staff helpful. 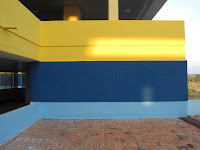 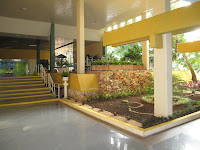 Here’s the view from the glassed-in sitting area right outside our door. No wonder I wanted to stay! 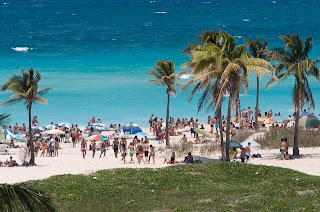 Every day began with breakfast then a trip to the beach for a swim and some downtime. After lunch we headed to on the hotel shuttle and stayed there until we were too tired to walk anymore or listen to another note of music. One day there was a bagpipe parade followed by dancing in one of the squares. The costumes were so beautiful. We followed the pipers to a bar called O’Reilly’s where there was an amazing music session with the musicians mixing up who played with whom. Cuban percussionists playing with Irish fiddlers and lots of other interesting permutations. It was wonderful to be part of.

I took my concertina and got to play in some sessions. Here are two of my favourite photos. In one, I'm playing a few tunes with some of the Cuban pipers and in the other, I'm sitting in one of the amazing little taxis playing for the taxi drivers who asked what was in the little box. They were delighted when I took out the concertina and asked me to play something for them.

The week passed much too quickly, but we’re already planning our trip to next year’s festival to see our new Cuban friends. Here are a bunch of photos of things in and around . Hope you enjoy them. 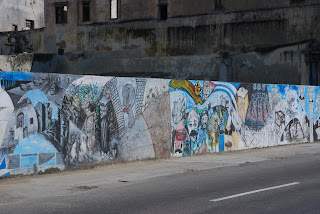 Please check out my newest release, Indulge Me, which is now available in ebook and audio. Go with Keane Daniels behind the scenes of the largest gay spa/bathhouse in as he follows a mysterious summons to pleasure.

Information on the Irish in Cuba is from John Moran's article in the Havana Journal.

Kaenar!!! Not only did I get to see fantastic photos (LOVE the ones of you on the beach and playing for the taxi drivers) and hear about what sounds like an amazing music festival (and you know how I love that!)but I also got a fanfreakingtastic history lesson. Woman, you ROCK!!!!

What fun! Thanks so much for sharing!

i would love to travel all over like that :o) beautiful pictures and awesome adventure!

What an experience! Great pictures to show everything and it looked like a wonderful trip. Thanks for sharing and glad you returned home safely.

Terrific photos and a fascinating commentary. Thanks for sharing, Kaenar. It was fun to see pix of you and your family.

Dear Bronwyn,
It really was a magical experience and we were so delighted to be part of the fabric of the community rather than just visitors. It was such an amazing adventure. We're gathering instruments, fiddle strings, recorders to take next year. Lots of ways to help out fellow musicians.
Kaenar
www.kaenar.com

Dear Cindy,
I'm delighted to let people see what an amazing country Cuba is and how warm and friendly the people. My Spanish really got a workout as did my little English/Spanish dictionary.
Kaenar

Hello Silver,
You wouldn't believe the price to travel there on Sunwing. Flight, hotel, food, free alcohol, shuttle to and from the airport, cancellation insurance= $695. It was a great deal and a life changing experience.
Kaenar

Hey Chrissy,
Thanks for commenting. It really was so great to be part of what was going on rather than just wandering around gawking at stuff-although we did an awful lot of that too. LOL
Kaenar

Hi Summer,
My family photos wouldn't usually work with my regular blog posts. LOL But I thought it would be fun to introduce people to them this time. Our son had such an amazing time talking to people and taking hundreds and hundreds of photos.
Kaenar

I'm so jealous, Kaenar! I've always wanted to visit Cuba. It looks every bit as complex and evocative as I dream.

You know, Lisabet, that is exactly what it's like.
For years, I've had dreams of being near the ocean, at a house or cottage, but when I get close to the water, the dream shifts to another scene and I never get to it. The moment I stood on the beach and looked at the water, I knew it was the same place I had dreamed about all those years. Gave me goosebumps. I hope that means my dreams about it don't stop!!!
Kaenar

Oh Kaenar, what a wonderful blog! I would never have thought about vacationing in Cuba. I'm sure the pictures don't do the beauty justice. As always, thanks for sharing.

Great post, Kaenar!
Thanks for sharing the pix!
:)
G.

Oh, how lovely! Thank you so much for sharing your trip memories and pictures. It was beautiful!

Thanks for sharing your trip..I am completely awed with the beautiful sights of Cuba..it is nothing like I expected. susan L.

Thanks for the invitation. Loved your blog today!

Now all is clear, thanks for an explanation.