Can you let out the animal in you? 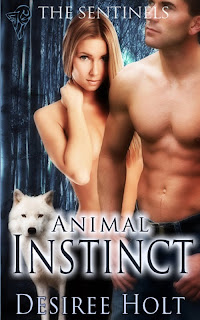 That's the question each member of The Sentinels asks. Eight shifters orhpaned from their packs who come together to protect those who ened it and guard other shifters. But when they need it, can they let out the animal inside to do what needs to be done?

Series Blurb – Their packs had been decimated in outbreaks of fear, and the eight shifters who made up The Sentinels gravitated to each other in San Antonio, Tex and the surrounding Hill Country. As the fought evil and protected the innocent, they searched for other pack orphans like themselves, in the process seeking their mates.

Book Four: Animal Instinct
When Ann Marie Knight literally fell into Drew Noland’s solitary existence as an injured white wolf, little did he expect her to shift into a woman whose scent called to him-mate! Already gathering to track a vicious group of men who maimed and hunted animals illegally, they turned their attention to rescuing her brother. But could Drew calm Ann Marie’s fears and convince her they were meant to mate for life?

Excerpt
The first thing Drew realized when he awoke was that he was stiff and sore and definitely not in his bed. The second thing, when he finally pried his eyes open, was that was a naked blonde was curled up on the rug beside the couch. A thick mass of lustrous curls tumbled over her shoulders and her skin, where the blanket had been dislodged, was as smooth and fine as alabaster. A thin red line across one shoulder was the only evidence of the bullet that had hit her.
A shifter. He’d known it in his gut but here was his proof. How and why did a shifter end up in Texas and more importantly, here on his property? He sat up very quietly, staring at her. His original intuition had been right. She was a shifter, like him. But where had she come from and what was she doing here?
Trying to be as silent as possible he rolled off the couch and crouched beside her. A flash of heat went straight to his groin, his cock hardening and thickening. Unable to help himself, he drew back the blanket, exposing her entire body. Now the heat coalesced into a major hard-on that threatened to break the zipper of his jeans. He couldn’t remember the last time a female has aroused him so quickly.
Of course, he couldn’t remember the last time he’d had sex with someone who really turned him on, either. He had become far more of a loner than he’d ever expected.
Tentatively he reached out a finger and traced the thin red line. The blonde trembled in her sleep but didn’t waken. Emboldened he drew a line across the swell of her breasts, then lightly touched each rosy nipple. They peaked immediately at the contact and a tiny moan echoed in her throat. Brushing the tousle of curls away from her face, Drew leaned forward impulsively and placed a soft kiss on her full lips, running the tip of his tongue along the closed seam. She had a clean taste, like the forest after a rain or the lake when a breeze had ruffled its surface.
He licked her lips again, wondering how long it would take for her to realize something was happening. He didn’t have long to wait. The moment he tried to slip his tongue between her lips, she awoke with a start and bolted upright, jamming her head against his nose.
“Jesus!” He reared back, pain shooting through his head and clamped one hand over his face.
The blonde yanked the blanket around her and scrambled away from him, a ferocious look in her eyes.
“What kind of pervert are you, anyway?” she demanded. “Do you always take women home, strip them naked and fondle them while they’re asleep?”
He swallowed a grin. “Only when they start out as a wolf and then shift,” he told her.

Thanks for the excerpt Desiree!
Love this series

Great excerpt, Desiree,congrats on your new release. I've read the first two books so far, and have Dark Stranger up next on my wish list.

I have not read any of these an they sound so good.
debby236 at att dot come

I havent had the chance to read any of this Series, Desiree, but would LOVE to! They sound YUMMY! I love, love, shifters! (ggg)

The excerpt shows a nice mix of heat with good writing and a sense of humor, looking forward to reading your new release.

How exciting, Desiree! Silly question--are there only four in this series? (You mentioned 8 shifters; are their stories combined?)

Thanks, and congrats on all four!

Congrats on your new release! This excerpt is really good! Love it! I need to check out the rest of the series.

Good Afternoon Desiree,
I'm trying to enter a contest and I think it is this one for the chance of a download to the first book in the series. Great excerpt too. If this is the right one to comment on for the contest entry. I want a pdf format and you can send to either of my email addresses.