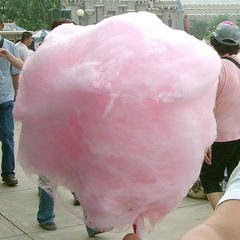 You're darned right I am.

However, as a writer and critical reader, I have come to the conclusion that some erotic romance would be improved by leaving out some of the sex scenes. These days, some authors are convinced (or perhaps have been advised) that because sex sells (and it does), more is always better. I've read books where the protagonists meet on the first page and they're going at it hot and heavy by the third page. Where scenes critical to the plot are interrupted in order to allow the characters to get off. Where complete strangers are pulled into the mix in order to make it possible to label the book as a ménage.

I understand the motivation. For decades, romance readers had the bedroom doors closed in their faces. When authors began leaving those doors open, making explicit what had only been implicit before, readers were like kids in a candy store. Romance that included graphic sex scenes became hugely popular. Authors started to venture beyond the vanilla, penning spicy tales of unconventional pairings, fetishes and dark fantasies, and readers ate it up (so to speak).

I'm not arguing for a return to the era of closed doors. Far from it. Recently I had a guest blog date with a colleague who asked for a PG excerpt from one of my books. It took me hours, literally, to find one! My point is simply that it isn't quantity that counts when it comes to sex in romance. It's quality.

Raw Silk has at least one sex scene in each chapter. However, each one plays an important role in building toward the final show-down, in which Kate, the heroine, must choose among her three lovers. The novel is a tale of sexual self-discovery. Every time Kate pushes her limits, she learns something new about herself. If you removed any of the graphic sex from Raw Silk, there'd be a hole in the narrative, a lack of continuity and logic. Raw Silk has a lot of sex, yes. But not, in my humble opinion, too much.

I've had conversations with author friends who write mostly sweet or sensual, rather than explicit, romance. They've confided that these days they feel defensive and inadequate because their work isn't as "hot" as the current fashion dictates. I tell them they should follow their instincts and intuitions, not the latest trends. The books that readers love, the ones they remember long after finishing them, are the books that speak to the heart—not just the genitals. Readers might find the sex exciting, but without a strong story and sympathetic characters, sex is like cotton candy. It melts away as soon as you taste it, leaving nothing behind but a sticky residue.

Posted by Lisabet Sarai at 7:00 AM

You're saying what I have for years. The sex has to fit the characters and the scenes. It has to make sense. It has to do something. If it doesn't, it's weakening the book.

As a reader, I don't usually have a problem with the number of sex scenes but the length. Geeze, half a chapter devoted to one sex scene bores the crap out of me. At the age of 44, I've had sex a few times. I don't really need to know how it's done step by step. Just give me the feelings of desire and passion, and I'm good to go. LOL

I agree some books become boring with too much sex scenes and not enough storyline. Frankly I want to lean more about the characters and read more about the places they live e.g if its futuristic and on another planet give us more details.and build up the relationship between the couple.

The thing that works for me is when you love the characters so much you can't wait for them to make contact - but I like the slow build up - the lingering kiss, the rapture of lips on smooth warm skin. the senses going haywire - not just a quick grope and a tumble on the sheets.

Lisabet,
You are so right, again. I've been asked to review books that left me scratching my head over the plot. I couldn't find it amidst all the bed-hopping and quick BJs in the elevator. I expect some of these works were written by newer authors, who will eventually learn to weave the sex into the plot and have the sensuality enhance rather than hide the story line. Great post, as usual.

As a reader I want characters and stories that touch my heart and emotions. Sure the sex is an added bonus but not the whole story, it enhances not detracts. I think that is the real gist for me - even what seems like meaningless encounters to me can make sense, not just take up word count, if done properly. Great post.

Totally agree!! Books can be like some of those old bachelor party flicks--just bang bang all night long and if you watched closely you'd see often the same five minute clip or so was repeated over and over. I found it more exciting to watch farm animals breed. Sadly some of our current erotica/erotic (allegedly) romance is just the same. My characters tell me their stories and they set the limit as to how much, how explicit and how kinky!! So I end up with everything from PG to NC-17XX at times. Keep it feeling real and right--not forced!! Very good topic, Lisabet!!

I don't think *every* single scene has to go towards building the relationship, but there has to be a limit. I won't believe a story where the characters "fall in love" when they've had maybe ten pages where they actually talk to each other.

Wow! Thanks to all of you for your comments.

I'd hate to think that people were skipping my sex scenes... that's a really bad sign!

And I now feel better about the fact that my scenes are usually relatively short compared to some of the ones I read!

Thanks again for taking the time to drop by.

I LOVE the picture!!! I just can't find cotton candy on a stick ANYWHERE this year!!!!

Hear, hear!...Or is it Here,here! I never get that one right.

I am one of those who writes a lot of sweet/sensual romance over the more explicit sex, and yes, there is such a thing as sweet m/m.

I do write sex, too, but like you say, it has to mean something. The story and the characters dictate when it comes in, not me, or my editor, or my publisher. Some want lots of sex, and so I give them those stories that have it, and some don't care. They get the rest.

As a reader, I like the sex to matter, too. I think, eventually, things will settle out. Even kids with candy eventually tapper off and stick to what they like best.

And by the way, that last visual, spot on :)

The books that readers love, the ones they remember long after finishing them, are the books that speak to the heart—not just the genitals. Readers might find the sex exciting, but without a strong story and sympathetic characters, sex is like cotton candy. It melts away as soon as you taste it, leaving nothing behind but a sticky residue.

But others, such as some of your books, Carol's, Kate Douglas, Amanda Day, LA Banks, to name a few off the top of my head - usually have the sex as a part of the story - either sudden realization that they really DO care for the other, or a reconnection after trouble/separation/horrific shared experience.

And those books are the ones I remember (and with a $1000+ annual reading habit between PB, Hb & e-books, believe me - I remember a good number of them ^_^ )

Oh, I'm glad I got this conversation going!

I recently wrote a free story for my monthly website update. I had promised my readers a "summer romance", so I had to deliver. (You can find it at www.lisabetsarai.com/lastdance.html if you're interested.) It doesn't actually have a complete sex scene. As I was writing I asked myself, "Gee, do I want to put this on my website? People expect really hot fiction from me. Are they going to be disappointed?" But the story, which is a nostalgic little piece with a touch of the paranormal, didn't need or want the sex. It just didn't fit.

But you see, even with my complaints, I've been infected by these trends.