Censorship, Where Does it End? 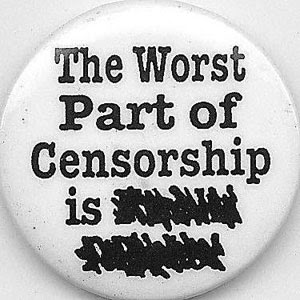 All across the country here in the USA, people have cracked down on what is considered appropriate. Use of derogatory terms to make fun of other races and genders and sexuality is frowned upon. Off-color jokes are taboo. Discrimination in any form is wrong. Good, good, and more good. We are all people, all basically the same, right?

How can making everyone equal be bad? Because everyone isn't equal. Some people work harder than others. Some are artistic, some can write, paint, work magic with numbers. Others can't.

People are not the same. Period. No, I'm NOT in any way, shape of form denying that denigration is right or moral. We should be able to live in a world where we get along, for the most part. A place where color of skin, gender, religious choice and sexuality are free of bias.

Unfortunately, we live in the real world. Disagreements happen. Arguments occur, but I continue to see the media labeling everything as racist or hateful, when some folks just have to agree to disagree. Just because I may not want a racetrack built outside my house, one that's loud and has a terrible odor from all the exhaust, does not mean I hate all white Southerners. The case of a five year old boy kissing a five year old girl in school is deemed as sexual harrassment. A police officer who arrests two men, one white and one black, is deemed a racist because the white suspect enters the car ahead of the other man. A woman fails to get a job at a prominent corporation and sues for discrimination, discounting the fact that her male counterpart was simply a better fit for the job according to his interview and his resume. (Note: all my examples were fictional, yet derived from stuff I've seen on the news just this past week.)

Where does the political correctness end? Do we now start treating everyone the same no matter their qualifications, age, ability? I'm all for giving everyone equal opportunity, then sitting back and letting them win or lose based on nothing more than their own merit. Sorry, but in real life there are winners and losers, and not everyone wins a trophy.

And what does the fat lot of this discussion have to do with writing?

Everything. It's coming to the point where we need to censor our words when we speak. I've lost count of how many terms I should no longer say without fear of offending someone. I'm not talking about blatant disrespect, but about slang that's okay for some to say, but not others. It's confusing, and it becomes a hot topic when writing, because my characters, like me, aren't into being PC, but my readers might be. So do I censor myself, or don't I?

I'm white. I've written heroines who aren't. I'm a woman. I've written about men. I don't insult my characters, but I don't sugar coat their lives either. If I've offended someone who doesn't like that my character proudly states she's black, so be it. If making an Asian man gay is offensive to another reader, I'm sorry, but don't read my book. If reading frank sexual language to describe what goes on between people engaged in sex offends, you're clearly reading the wrong author for you.

While I don't tolerate putting others down because of their race/gender/orientation, neither will I stand for others telling me how to write because it's not politically correct. I'm writing fiction, and I'm not calling anyone any names. You don't like it, don't read it.

Believe it or not, I'm not writing this as a rant in response to anyone, but as a response to some of the crap I've seen on TV lately.

My two cents on this Friday. Peace out.

This is why I don't watch much TV. You're right, though. Characters should never be censored. And as a reader, if you don't like it, don't read it! I'm with you on this subject.

Things aren't much better here in South Africa with regard to sensitivity with regard to race, gender, religion and sexual orientation. Being white, I'm the one who is often discriminated against, and woe betide me if I even suggest certain folks need to move on from apartheid-era bitterness.

As a shaman/wiccan/whatever (I haven't invented the right word yet) the underlying tenet of my belief system is, 'Do what you will, and harm none'.... Now this works wonderfully for my spiritual life, but my life as a writer... um... I dunno

... lets break it down.... I do (write) what I will, that part's easy ( for the purposes of this discussion anyway!)... but harm to none? that's trickier... mostly for the reasons Marie mentioned in her post...

... then again, maybe the concept of 'harm to none' is that it is wilfully done. If I wilfully set out to hurt someone with my writing, then that doesn't sit well at all, but if what I write is necessary (in me 'umble opinion) to move the story forward, then that's OK with me...

... now, the question begs, is this self-censorship, because I certainly have made a value judgement on what will or wont hurt another being, or living from my personal ethics?

... and all this is based on the premise that we're all rational adults who are watching/listening/reading and making their own choices

... don'tcha love the grey areas between the worlds!

Excellent post, Marie with some very valid points that I've often thought about myself with my own work.

Nerine, interesting perspective. It's odd how so many problems in the world remain the same, despite where they happen. I'm with you; I wish more people would look to the future instead of the past.
Marie

Never assume we're all rational adults, widdershins. If only we were! I think "and harm none" totally applies, and it's the intent that counts. THanks for the thought-provoking response.