Oh, yum, what is it about a hot soldier that presses our buttons? The bravery, the determination, the hot body that's super fit yet battle worn… oh, I could go on.

All these reasons add up to why I was compelled to add to the new anthology Stand to Attention just out from Totally Bound. Nestled up with brilliant authors Sean Michael, Jambrea Jo Jones, Lucy Felthouse, Noelle Keaton and Elizabeth Coldwell, I'm thrilled to be contributing my m/m/m story Who Dares Wins. 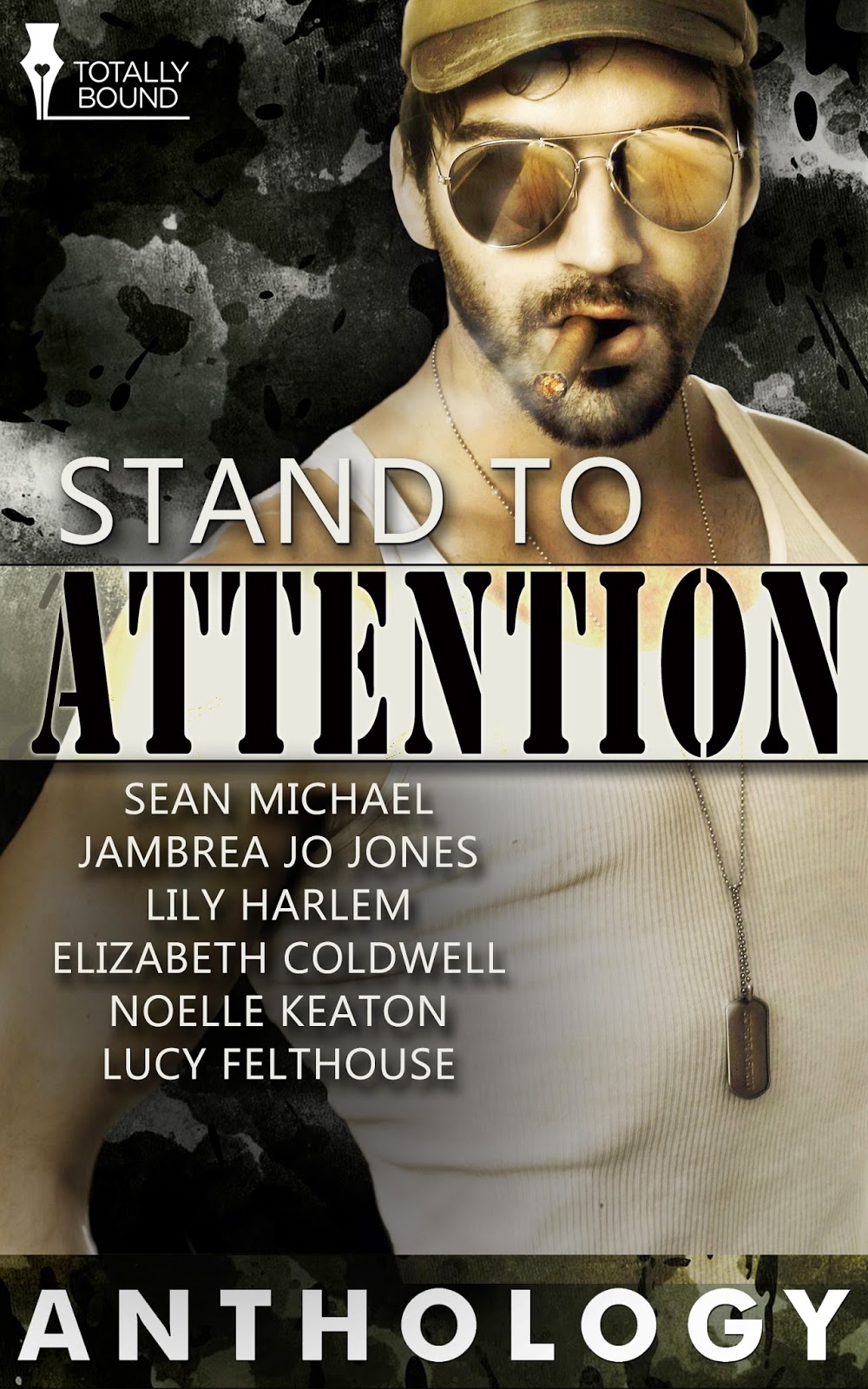 Who Dares Wins was fun to write and will be available as a single title later in the year. Here's the blurb…

When secret service becomes not so secret servicing by not one, but two sexy soldiers, Ken learns that dreams can come true in explosive style!

Waiting for my SAS husband Jack to come home safe and sound is always a gut-wrenching, heart-twisting time. I have no idea where he is, what jungle swamp he may be lying out in or desert he might be marching across.

So naturally when he returns to me, our emotions can't fail to run hot and our lust for each other cranks up to sky-high levels. But the one thing about Jack is he lives for the extreme and seizes the moment. I really should have known what would come of me telling him my wildest fantasies.

Oh, yes, he's a guy who gets results…and when he brings home his colleague Slider, equally tough, equally rough, the pair of them can't fail to hit the target. That target happens to be lucky old me and I head off on the ride of my life… 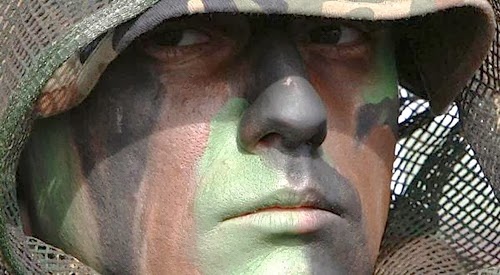 Working on more than one story about romantic relationships at the same time, and being married myself, it made me think about how drama is the bread and butter of the genre.

In this case with drama I mean the tendency for the (potential) lovers to have all kinds of misunderstandings that in reality are usually dealt with in a short conversation. If I'm puzzled about something my wife does or says,I simply ask her and she'll explains and that's pretty much always the end of it.
But, if we had been fictional characters, I would likely go for the long road and assume I know what's going on and before you know it the readers are anxiously wondering if and how the writer is getting those girls back together again.

Looking at my own work I don't have a strong tendency to write in such manner, because I can't help but find it a bit silly, be it with some exceptions. But, it also makes me curious if I could actually write something that is at least touched by the big old misunderstanding.
I'm wondering how Isaac and Tom in the Calling the Shots series, who are so very mature and evenly levelled about their D/s relationship, would deal with a situation when they do assume and don't communicate like grown-ups.

I guess I have another one on my to-write list...

The Calling the Shots series has three parts so far and can be found at Totally Bound and other places.

It’s been a very bad snowy winter with back to back storms. Each time it seems like we have snow every other day. I’m longing for some warm weather. Since I am and it seems like warm weather is a long way off I’ve been using my writing to imagine warmer days. LOL. That is the great thing about being a writer it can be below zero outside but when I am lost in my writing it can be a hot ninety degrees. At least that is until I come back to the reality of what the temperature really is. :) I’m about to escape into my writing to imagine that I’m in warm weather and wishing it was true.


What are you doing to keep warm? 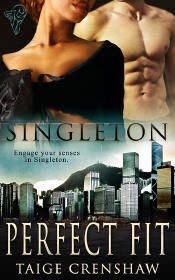 Perfect Fit -  Buy here at Totally Bound.
Posted by Taige Crenshaw at 5:23 AM No comments:

Coming Soon - Her Secret Past.

My editor at Totally Bound told me that once I signed the contract I could tell EVERYONE about my upcoming novel. So I am telling everyone, even the crazy dude at the bus stop!

I wrote a novel. I started it with NaNoWriMo in November and finished at the end of January with just over 72 000 words and a knackered me.

I submitted Her Secret Past with trepidation. I thought it was good but the minute I send a story off I get blessed with crippling doubt. With this one being for a specific call, the What's Her Secret range, that doubt was doubled. Would the editor like it? Would it fit the bill?

I got the answer the very next day! Now that is unusual and was very welcome as I was told it had been accepted for publication making me to do the happy dance of joy in the local chemists causing my 12 year old daughter much embarrassment! I've had to hold the news in until I signed the contract.

But now I can SQUEEEE! Loudly and tell you all about it. :)I even have a cover and a blurb and everything! 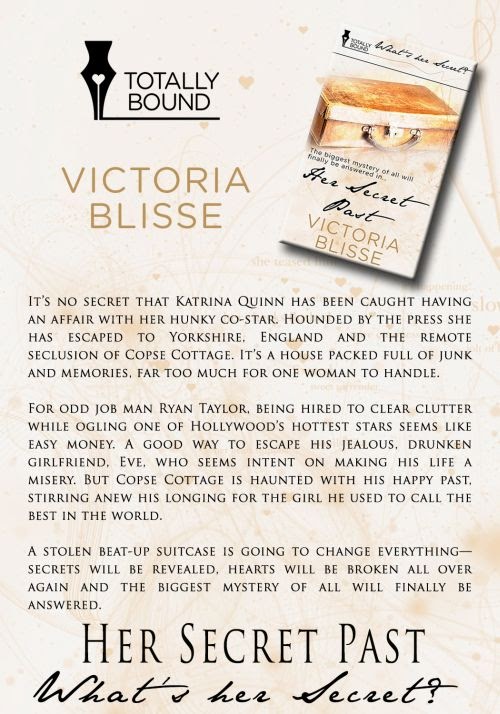 That's all I can give you for now, but Her Secret Past will be available from Totally Bound in May, not too long to wait!

Posted by Victoria Blisse at 8:24 AM No comments:

If Only It Really Was Raining Men...

Well I don’t know about you, but I am fed up of the rain! All we’ve seen throughout winter is rain, rain and more…you guessed it…rain. Taking the dogs for a walk, doing the shopping, even just getting into the car to go to work all have the same end result - getting soaked.


Of course, curling up with a great book seems even more appealing when it’s so cold and dreary outside. And as Valentine’s Day approaches, Totally Bound has plenty of fabulous reads to get you feeling romantic. Whether you’re single or attached, there’s bound to be a book for you. (Sorry, couldn't help it!)


Next month sees the release of my historical Western Harlot at the Homestead. It’s the first in a series called The Duggans of Montana. I’ll post more about it in March, but here’s a taster.

Posted by Anonymous at 1:00 AM No comments:

White Hot Valentines with Over My Head

I love a story that’s hot and sweet, but makes me think about the characters long after the last page. Over My Head is one of those stories for me. I loved the Slade and Astra stuck in my head. I’d originally imagined them in the book, When You’re With Me. I wanted to know more about them—and I wrote them. *G* So, instead of writing the next story in the series, I wrote the prequel.

I’d been asked to write a valentine story. Something that’s hot, but original. An exotic dancer and a cop may not be the most original story, but what happens to them is. Oh, and Valentine’s Day is involved.

Being a dancer, Astra knows how to get attention and work a crowd. She knows she’s hot, but her self-confidence doesn’t match her looks. She’s been in the exotic dancer business long enough to know the guys she meets aren’t there for love. They want to see nude girls. When Slade walks in, he gets her thinking.

I do have to admit, Valentine’s Day isn’t a big day for me. My DH and I don’t usually celebrate it. We’re strange. Every day for us is a way to show each other little ways we love and appreciate each other. Now, I know. Seems silly. That’s okay. If I learned anything from Slade and Astra, it’s being willing to celebrate the little things even when it’s not the designated holiday.

What about you? What do you do for Valentine’s Day? What’s your favorite memory from the big day? I’d love to know!

Here’s a little bit about my novella, Over My Head: 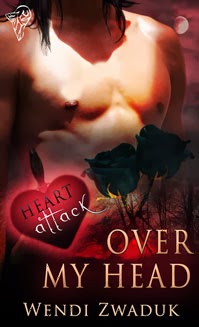 What happens when two opposites realize they have more in common than expected?

I’m a dancer, a damn good one if you asked. I work at the Silver Steel Gentlemen’s Club. My hard and fast rule? No freebies and no office dating. Except for Slade. Hard, fast, slow, gentle...I don’t care.  I’ll take him any way possible. But he’s not that in to me.

Or so she thinks. I’m a bouncer at the Silver Steel. Astra doesn’t realize I see her.  I can’t help myself. She captivates me every time she’s on the stage. I want her, but I have a...problem. I’m not at the Steel to pick up chicks or even work the room. I’m there to stop the influx of drugs into the community. Yeah, I’m a cop. But if the job means sampling the dancers... As long as I keep my heart out of it, I’ll be fine.

* * * * * *
I’ve always dreamt of writing the stories in my head. Tall, dark, and handsome heroes are my favorites, as long as he has an independent woman keeping him in line.  I love playing with words and letting the characters run wild.

NASCAR, Ohio farmland, dirt racing, animals and second chance romance  all feature prominently in my books.  I also write under the pen name of Megan Slayer. Come join me for this fantastic journey!

If you like my work, tell your friends and email me. I love hearing from readers!

Posted by Wendi Zwaduk and Megan Slayer at 12:00 AM No comments: