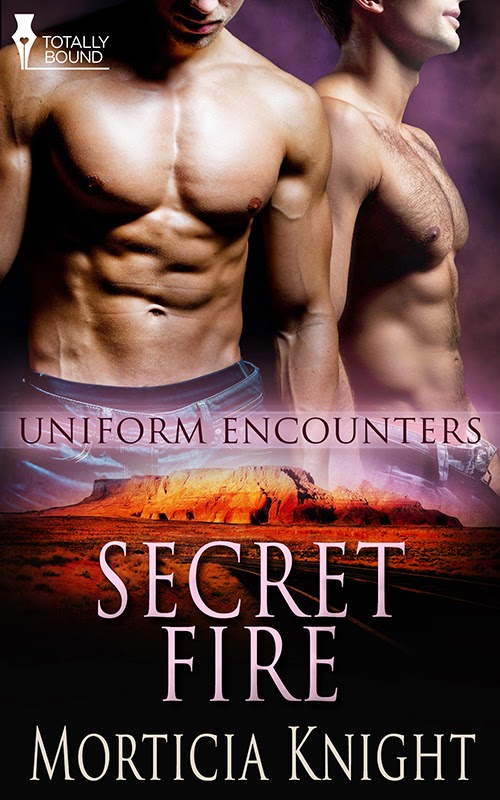 This has been a busy month for me so far - Secret Fire came out on May 1st and I'm readying for another Gin & Jazz release on June 6th, as well as putting the finishing touches on the next Uniform Encounters installment! Phew, I'm tired. But never too tired to share naughty excerpts or contest info.

From now until May 21st, Totally Bound is running an exciting contest where you can win 3 M/M e-books: Secret Fire by me, Riding & Regrets by Bailey Bradford and Ask the Oracle by JJ Black. To enter into the drawing CLICK HERE. Winners will be announced at the Facebook party on May 21st where you can also chat up me, Bailey and JJ. Come and join the party HERE.

Okay, now for the naughty excerpt part. In this scene, police officer Zach and Fire Marshal Daryl are right at the beginning of what they hope will become a lasting relationship. The one thing where neither one of them have any doubts is in the bedroom. They are so compatible in fact, that Daryl is hoping to share even more kinky fun with Zach - if he agrees....


“You want me to grab us another beer? There’s something I’d like to discuss.”
A look passed over Daryl’s face that appeared to border on fear.
“Is that because I’m going to need it?”
Already standing, Zach bent to give him a quick peck on the lips. “Relax. It’s nothing bad.”
Looking uncertain, Daryl nodded. After getting the beers and sitting back down again, Zach considered Daryl. The vulnerability in him was more present than ever. And the seriousness he had initially assumed meant that Daryl was boring and hostile, Zach recognised as being something else entirely. It was actually more of an indicator of the depth of feeling inside of him.
A person I can get serious about.
That didn’t mean they still shouldn’t discuss things—especially things that related to the intimate part of their relationship.
“Last night was easily the best, most erotic, satisfying night of my life.” He chuckled. “Especially once we got to the part where I was satisfied.”
Daryl frowned. “But?”
“Um, so, are you like a Dom or something?”
Daryl widened his eyes. “What? You think I got a dungeon in the garage along with the treadmill?”
“Don’t dungeons need to be underground?”
Daryl shook his head and rubbed his hand across his beard. “I don’t know what is involved with dungeon etiquette and I’m most certainly not a Dom.” He frowned at Zach. “Is it that you like to top too?”
“No, that’s not it at all. I’m perfectly happy with the assignment of roles in our relationship. I was just curious because that was pretty intense last night. I’d like to know what to expect, what you expect from me.”
Zach could see that Daryl was lost in thought, frowning, his lips pressed in a hard line. “You really liked what we did last night?”
“My God, yes. I don’t know how else to express it to you.”
He nodded. “Then would you like to experiment some more with me, doing things like that?”
Zach sucked in a deep breath. He was trying to remain detached and conversational about the whole subject but his dick had its own ideas.
“Define ‘things like that’.”
Daryl shrugged. “Whatever you want.”
“How about whatever we want?”
“Yeah, okay.” He paused, a struggle seemingly going on inside him. “Just so you know, I’m not a true BDSM guy or anything like that. But I like being the top, controlling my man, controlling his pleasure. Things like tying up, blindfolding.” Daryl coughed and wiggled in his chair, his face flushing. “If you ever wanted, I wouldn’t be averse to trying other things like spanking or… You know…plugs, dildos, whatever you want.”
After Zach was sure that his jaw hadn’t hit the ground of the bar, he gaped at Daryl. He rubbed the back of his neck and glanced about the room, his embarrassment a tangible thing.
“Fuck.”
Daryl peeked at him. “Too much?”
“Not at all. I haven’t done a lot of that stuff before, but hearing you talk about it leads me to suggest we get the hell out of here, put in some practice then do some shopping online at Kinky Toys R Us.”
“Is that a real shop?”
“I have no fucking idea.” Zach stood. “Let’s worry about it later.” He clapped his hands. “Why are you still seated? Let’s go.”
Daryl snorted. “I enjoy you, Zach.”
“I’ll be more enjoyable tied to your bed. Time’s wasting.”
Daryl shook his head. “Whatever you want, darlin’.”
****
To read about some more fun with Zach and Daryl, pick up your copy of Secret Fire HERE

Posted by Morticia Knight at 7:33 AM

Packers and Movers Bangalore as a Services providing company can make all the difference to your ###Home Relocation experience. Bangalore based Company which offers versatile solutions, Right team that easily reduce the stress associated with a ✔✔✔Household Shifting, ***Vehicle Transportation. we help things run smoothly and reduce breakages and offer you seamless, Affordable, Reliable Shifting Services, Compare Shifting Charges @
Packers And Movers Bangalore

I must say you had done a tremendous job,I appreciate all your efforts.Thanks alot for your writings......@ Packers and Movers Ahmedabad

Really impressive post. I read it whole and going to share it with my social circules. pls visit @
Packers and Movers Ahmedabad

Excellent Blog! I would like to thank for the efforts you have made in writing this post. I am hoping the same best work from you in the future as well. I wanted to thank you for this websites! Thanks for sharing. Great websites! Packers And Movers Pune

We provide high quality Packing And Moving services at affordable prices within your budget. Whether it is home relocation or commercial transport, just leave it on us. We will deliver your belongings safe and secure.@ Packers and Movers Ahmedabad

This is really attentiongrabbing, You're a very professional blogger. I have joined your rss feed and sit up for in search of extra of your fantastic post. Packers And Movers Chennai

Thanks on your marvelous posting! I really enjoyed reading it, you’re a great author.Please visit here:
Local Packers And Movers Bangalore

Packers and Movers Bangalore as a Services providing company can make all the difference to your ###Home Relocation experience. Bangalore based Company which offers versatile solutions, Right team that easily reduce the stress associated with a ✔✔✔Household Shifting, ***Vehicle Transportation. we help things run smoothly and reduce breakages and offer you seamless, Affordable, Reliable Shifting Services, Compare Shifting Charges. @ Packers And Movers Bangalore

Packers and Movers in Mumbai said...

Thank you for sharing valuable information and useful post. I enjoyed reading this post and nice info always....@ Packers and Movers Mumbai

A shortage in a specific region can influence the speed of QB Online Login. Thus, it is important to meet the framework necessity to further develop the QuickBooks speed. Hence, we present to you this QuickBooks Running Slow solution guide where you will become familiar with multiple ways of supporting the speed of your bookkeeping stage.