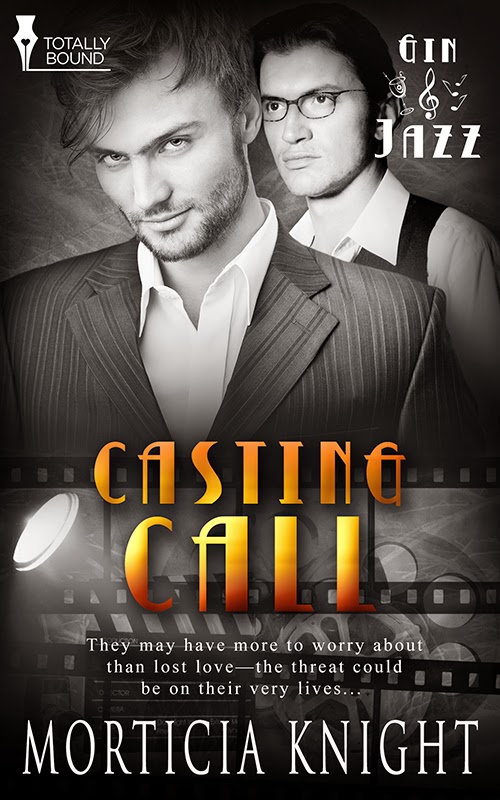 Casting Call, the sixth installment of the Gin & Jazz series was just released a week ago. In this one we get actor Will Carmichael and director André Chenard’s Happily-Ever-After. For those of you following the series, you already know that Will is a bit of a playboy and André is a serious artist influenced by the newly developed Russian Method acting technique.

Historicals are always a unique challenge. Even though most stories require some form of research, with a historical, every single word or phrase – never mind whether zippers had been invented yet – has to be stringently checked. So far, I’ve only come across one blooper in the series, and it occurs in the first book. When I verified something to see if it was around in the 1920’s, the sources I came across stated it was from that decade. Once Hollywood Bound had already been published and I was working on subsequent installments, I discovered another article that gave the exact date it was first around as being 1927. Hollywood Bound begins in 1924. Oops.

I’m purposely being vague about what I got wrong for two reasons: I don’t want to take a reader out of the story when they stumble across it since it’s so obscure, the majority of people reading would never even notice. However for you hardcore history buffs out there, I wanted to confess and offer the first person who PM’s me at my Facebook page an autographed paperback copy of Hollywood Bound.

While writing a historical novel might be fun, it can also be exhausting. However, one of the things I enjoy so much about it is that it gives me the opportunity to get lost in another era. I’ve been working on the Gin & Jazz series for a year now, and still have a few more books to go. By the time I’m done, I could almost teach a class on the era, complete with food, slang, fashion, prices and locations. And in order for it to be just as fun for the reader, the details have to be accurate without being tedious.

I’ll leave you with a sexy little snippet between Will and André from Casting Call (Gin & Jazz 6) that includes some era appropriate details:

As soon as they arrived in his private office at the back of the building that would be the setting for his next motion picture, he found himself trembling. Everything about them being alone together in the ten by ten room inspired André to want to cross the line, before even one crank of the camera had been turned. They had never had complete privacy before. The film wasn’t due to begin for at least another week—there was no one else in the building. He couldn’t meet Will’s eyes.
Keeping his head down, he gestured for Will to sit in the wooden chair next to his simple desk and oak swivel chair. He entered his small private bathroom to dig around in the cabinet for something he could use. Not sure exactly what was in there, he was fairly certain he had used some mercurochrome on his palm after he’d cut it. It had been sliced as he’d cleaned up the broken ceramic shards of a black panther statue. He smiled as he remembered the moment. Jack Stone had shoved it over as he’d finished filming his last scene with André. Jack had been gloriously unrestrained.
Continuing to paw through the cabinet after he’d checked the various half-crumpled paper bags containing assorted items next to the sink, he shoved aside thoughts of the current scenario. An unrelenting ache to hold Will, touch him, to kiss him bloomed inside of André. And fear that he had made a mistake, that Will could never reach the depths of emotion Jack had so openly given. He sighed, a rueful sounding noise. Detecting movement, he turned to see Will standing in the doorway.
“Everything well in hand, old bean?” He chuckled. “I beg your pardon. André?” He glanced around the close quarters of the washroom. “I thought the random collection of papers and books strewn about your office was overwhelming—however, I believe this area wins in terms of clutter.”
Will was in no way mocking him. His eyes had a tantalising gleam once André allowed himself to meet his gaze. Eyes that had darkened, that radiated desire. They were within a foot of one another and Will no longer reeked of another man’s spend. Instead, there was a refreshing aroma of citrus—oranges and lemons. It was the scent of California—sunshine, fresh and crisp. It was Will.
Swallowing hard, he was sure that he would remain glued to where he stood for all of time. Will broke his gaze, glancing past his shoulder.
“Is this what you were searching for?”
As Will leaned over André to reach around him, his left shoulder pressed against André’s arm. Before another thought arose, he grabbed the side of Will’s jaw, turned his head and captured his mouth in a furious kiss. It was a simultaneous explosion of need. The more André drove his tongue into the heated cavern of Will’s mouth, the more Will answered with frantic lips. Opening up to him unreservedly, he sucked on André’s probing appendage, drawing him farther in.
Breathless, André couldn’t bear to end their connection. Clutching Will’s shoulders, he then shoved him back against the wall by the doorframe, knocking over various and sundry items, kicking paper bags out of the way. He pressed against Will, holding him there with his body. There was barely any room, but in that moment André couldn’t be bothered to care. Releasing himself from any further concerns, anything that would get in the way of his sexual frenzy, he continued to mash his lips against Will’s. He ground his throbbing cock against Will’s swollen erection and a deep moan rumbled from the actor.
André let his hands roam freely, memorising with his fingers and palms the lightly muscled frame of Will’s spectacular form, his strong thighs, his muscled ass. He sensed Will’s submission, the way he melted and arched into every caress from André, every seeking touch. Will seemed ready to allow himself to be taken in any way André wished. Never before had he yearned to overpower a man as much as he did in that moment.
Reluctantly, he broke the kiss and gulped in air. Will didn’t look away—he stared at André through hooded eyes, his breathing frantic. André removed his glasses, tossing them into the porcelain sink behind him. The corners of Will’s mouth lifted and André became intent on encouraging them into a full and contented smile.
“Unbutton your trousers and let them fall to the floor. Don’t take them all the way off, let them pool at your ankles.”
****
Get your copy of Casting Call: https://www.totallybound.com/casting-call